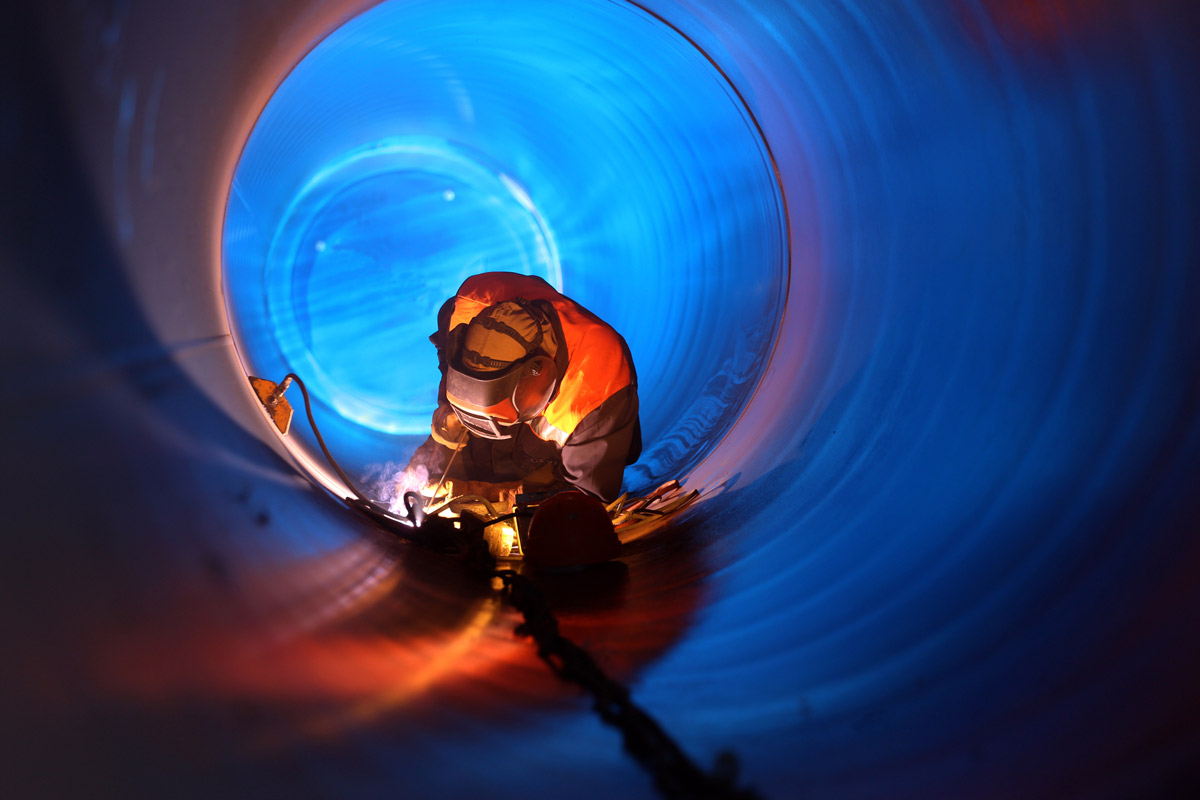 How Much Do Welders Make?

A career as a welder is a smart, blue-collar choice because a college diploma is not required. You can enter this field and start earning an entry-level welder salary with moderate on-the-job training.

Demand is high primarily due to a lack of skilled welders.

In the next ten-year period, the field is expected to add 14,500 employees. One of the first questions asked when considering this field is: what’s the starting welder salary?

How Much Does Welding Pay Per Year?

Welding pay varies. You’ll enter the field requiring training, and if you stay in the field long enough, you’ll become a specialist who is earning a top-tier salary.

Lack of skilled workers is likely to push welder salaries even higher than the average.

Welder salary varies by skill and industry. The best means of narrowing down your potential salary is to find the salary in your niche. The U.S. Bureau of Labor Statistics provides the median pay in 2019 for welders.

If we dig deeper into the figures, we see Indeed.com list the average base salary of welders at $17.88 an hour. There is, however, a big discrepancy because there’s also a listing of:

What I surmise from these figures is that the average hourly pay is up this year because there’s not enough skilled labor available. Shortages of skilled labor have allowed many welders to enter the field at a higher salary than just a year prior.

Starting Pay for a Welder

Welders today are making more than in years past, and this is reflective in the salaries listed above. Based on those salaries, a welder making $18.96 an hour would earn $39,400 during their first year in the industry.

It’s important to negotiate a higher salary as soon as possible because once you have skills and experience, you can seek a position as a welder in another field.

A lot of companies reported turning work away because there weren’t enough welders to fill demand. Lack of skilled workers led to a boost in wages in 2018 in an effort to lure in more laborers.

There has also been a shift in the market because of minimum wage growth.

Many metropolitan areas in the United States increased the minimum wage to $15 an hour, and the rise in minimum wage has also helped bring up salaries for starting welders.

But you need to be careful.

You’re entering a field that is in high demand, and while the percentage of people making $17+ an hour has risen sharply, there has also been an increase in the number of workers earning less than $10 an hour.

Demand higher pay if you’re being offered this low rate – you have a valuable skill.

You can enter the field with a high school diploma, making it an attractive choice for anyone who doesn’t want to go to a traditional four-year college. Trades are a great way to make a good wage, and a welder salary demonstrates this very well.

There are two ways to increase your welder salary:

Experience comes with time, and if you want to make the most of your time, make sure that your skills continue to evolve. Tackle new niches, work to learn about new welding techniques, and make the years building up experience count.

Education is still a great way to make the most out of your time.

If you want to start off with a higher salary, there needs to be a tradeoff for your employer. The tradeoff can be not having to undergo training while on-the-job. Technical schools eliminate the initial learning curve, allowing you to make more money.

The current landscape is allowing many welders that go to technical school to earn $30 to $35 an hour after being in the industry for 7 to 8 years.

That’s double the pay of an entry-level welder.

Another quick note about maximizing your salary is to demand more. Quit rate, of the percentage of welders that quit to go to a higher paying position, is near all-time highs. Welders are following in the footsteps of the tech industry:

You may not want to switch careers rapidly, but the issue is that your employer will not give you a pay bump to match current industry rates. Looking back at the hourly wages before, you can see that welders that have one to two years of experience are earning less than those with less than a year of experience.

Employers may have started these welders at $15 an hour and have given them a $1 raise. But the welder isn’t keeping on top of the market or doesn’t know that the new guy is making more with less experience.

Management may not want to give you a $3+ raise, so they’ll keep you in your position for as long as you accept the lower wage.

Salary progression is expected in every field. As you move from a welder that needs to be supervised and trained to a welder that companies depend on to keep their operations moving along, you’ll be able to demand a higher salary.

You may find a lot of positions for:

Think of these positions being entry-level to senior positions. Each position will demand a higher paying salary and experience.

An entry-level position, with compensation being $38,110 – $48,110. The average salary is around the $42,700 range. The salary range only goes up from here. Keep in mind that this is not total compensation and doesn’t include bonuses that you may receive.

Some welders can enter this position in 7 years. Work hard, continue advancing and don’t be afraid to seek new positions to demand a higher wage. You will be the one that companies rely on for inspecting structures and the welds to ensure that they’re sound.

Cities pay their workers differently, with some cities paying significantly more than others.

A welder salary is also dependent on the city in which they’re employed. If you’re in Newport News, VA, you’ll earning the highest pay of $27.22 per hour because demand is higher. There are a lot of other cities where the pay is great:

States where welders earn more are:

You’ll also find a few states where the average salary is lower than the national average. While it may be impossible to not work in these states if you have friends, family or a house in them, others may not want to work in the following states because welder salary is below average:

There are a few additional states where the welder salary is lower, but none of the states have the same difference level as those listed above.

If you don’t mind moving to another state to land a job, you’ll find that the following states have the most welding jobs:

Maximizing your earnings means going to work in hotspots where welding pay is higher. But there’s one other way to raise your welder salary: choose one of the highest paying jobs.

The high-end jobs, primarily underwater welding, are some of the most dangerous in the world. The work is intense, and landing a position is very difficult, but salary can be as high as $300,000 a year as an underwater welder.

Choose the industry you want to work in carefully for a quick boost to your earning potential.

What Are the Highest Paying Jobs for Welders?

The best paying welding jobs demand the most experience, and they’re in the highest demand. You’ll find it difficult to find many welding opportunities in the highest paying fields because the welders in these fields rarely leave their positions.

With that said, if you’re willing to put in hard work and wait for your opportunity to move up, you have the potential to enter any of these high paying jobs.

Opportunities exist at some of the largest corporations in the United States:

You’ll also find jobs from many other companies, including but in no means limited to:

Welding is a career that can be very satisfying. You need to consider the dangers that come with the industry and the position. The following positions offer the highest welder salary and risks:

Welders in this field are the lifeline of the infrastructure industry, including positions in:

As long as basic resources are required in society, you’ll find room in this industry. Salary ranges in this industry are $35,000 to $58,000 per year. You’ll find that the vast majority of positions are on oil rigs and in refineries.

You can also find pipeline welder openings in the following industries:

The military is known for hiring pipeline welders. You’ll be working on hard-to-reach infrastructure with responsibilities of producing high-quality welders. The positioning and scope of the work is intense, but it’s a position that is in high demand with a lot of upside.

Welders that want to make the highest salary will often specialize in underwater welding. The industry does have positions with salaries of up to $300,000, but these salaries are going to require decades of experience.

If you look at the top and bottom 10% of workers, you’ll find that the average salary in these extremes are:

But this intense position is very demanding and will require you to perform all of your welding underwater. You will have to become a diver and will be paid for your inherent risks as a result.

You’ll have to deal with:

The position may require you to travel and be away from home for long periods of time. You’ll be performing both:

You’ll often be welding in a specialized, sealed chamber. The hyperbaric chamber forces the water out of the chamber and allows you to begin welding.

Intense, you will need to undergo extensive training and will have to become proficient in diving. A few of the skills that you’ll be required to learn and often become certified in are:

You may also be working for the military in this position, with a lot of Navy builders in this field.

You can be a contractor and dictate your pay and schedule if you want. The industry requires you to work with a variety of metals and master the welding skills needed for each respective metal.

Different skills and techniques will be needed to enter the field and be well-rounded enough to enter the position.

Experience will go a long way in enhancing your skillset and allow you to demand a higher welder salary.

Welding is a Solid, Essential Career

A career as a welder is one that is highly profitable and always in demand. The trades, including welding, are always going to be essential because the structures that need welding cannot be neglected.

If a welder suddenly becomes obsolete, this puts the military, energy, oil and key infrastructure at risk.

Welding is a skill that is always in high demand, and with an expected gap in skilled welders in the next few years, it’s a field where the salary of a welder is only going to increase. If you don’t mind switching jobs and always seeking the highest salary, welding can be very profitable.

Always demand more, and keep on top of starting and current salary levels.

With such a void in the industry, you’ll be able to find employment rapidly. You don’t need a college degree, but you will be able to demand a higher salary when you go to a tech school that offers rapid training and real-world applications.

Job security is high in the field, so you won’t have to be concerned of not finding a job if a recession hits or the economy begins to slow.